The Most Beautiful Villages between Liguria and Tuscany

By Raffaella MonacoApril 7, 2022No Comments

The regions of Liguria and Tuscany are famous for their scenic villages ranging from quaint fishing hamlets to luxury holiday resorts, and from medieval hilltop towns to art and wine centers.

Let’s embark on a journey along the most beautiful villages between Liguria and Tuscany, departing from Genoa and going eastwards along the Italian Riviera.

You might not have heard of it, but Camogli is one of those picturesque villages off the beaten path that you cannot miss.

It’s a typical fishing hamlet with candy-colored homes and a small harbor.

Its historic center is intact and includes the beautiful Basilica di Santa Maria Assunta and the ancient Dragonara Castle. 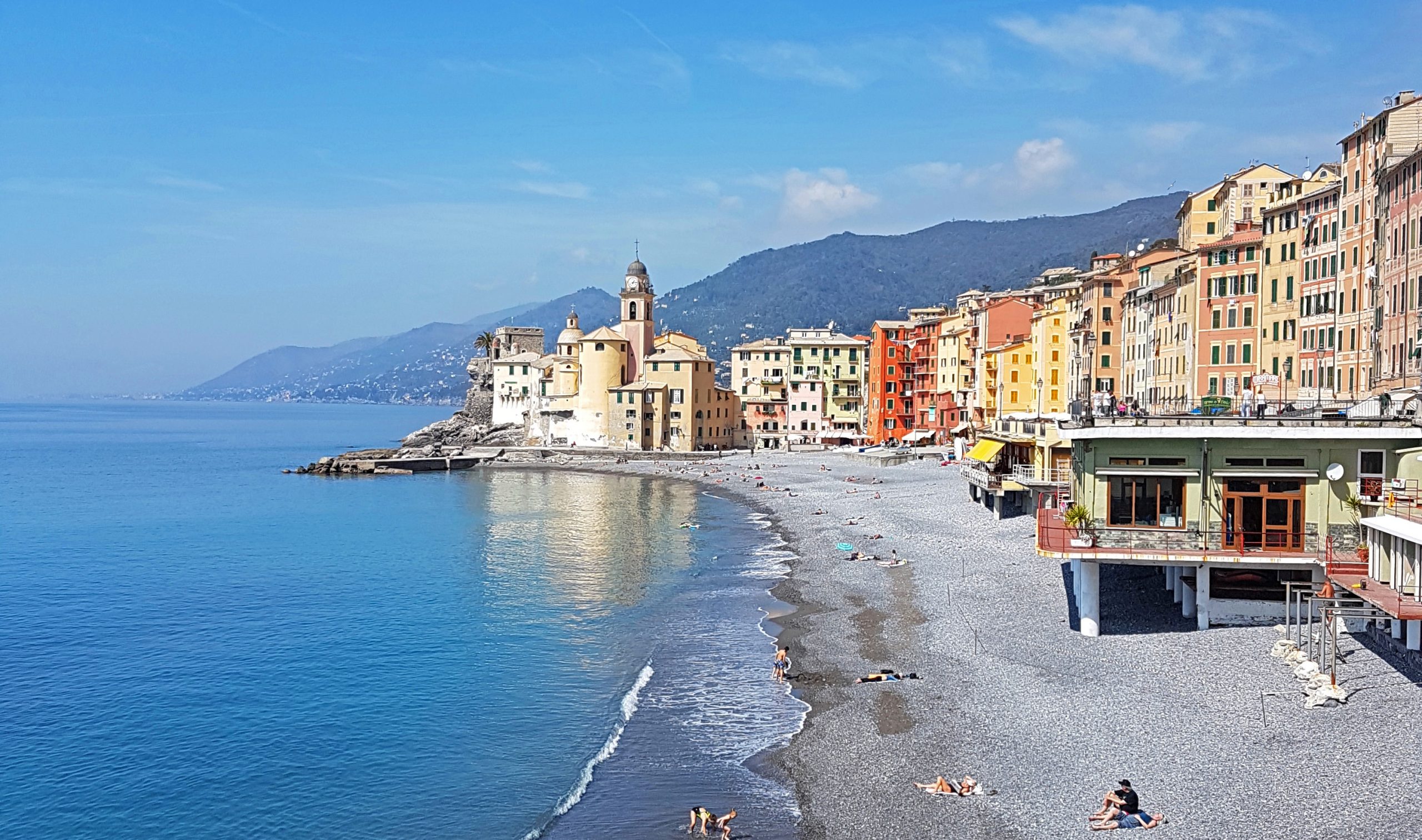 In addition to baking some of the most delicious and traditional focaccia, Camogli is home a tonnara, or tuna fishing station, that is one of the oldest and one of few that is still active in Italy.

It also houses a prestigious naval college founded in 1874.

Camogli overlooks Golfo Paradiso, while on the opposite side of the promontory you will find its chic neighbor on the Golfo del Tigullio… welcome to Portofino!

As Condé Nast Traveler puts it, this coastal town “is one of the most beautiful European ports to sail into”.

This is the ideal place for an exclusive private boat tour!

Yet, it is also an irresistible destination for those who love nature and outdoor activities.

In fact, the Portofino Regional Park is a paradise of Mediterranean vegetation that can be explored hiking all year round along an extensive network of trails.

Looking for a hidden gem near Portofino? 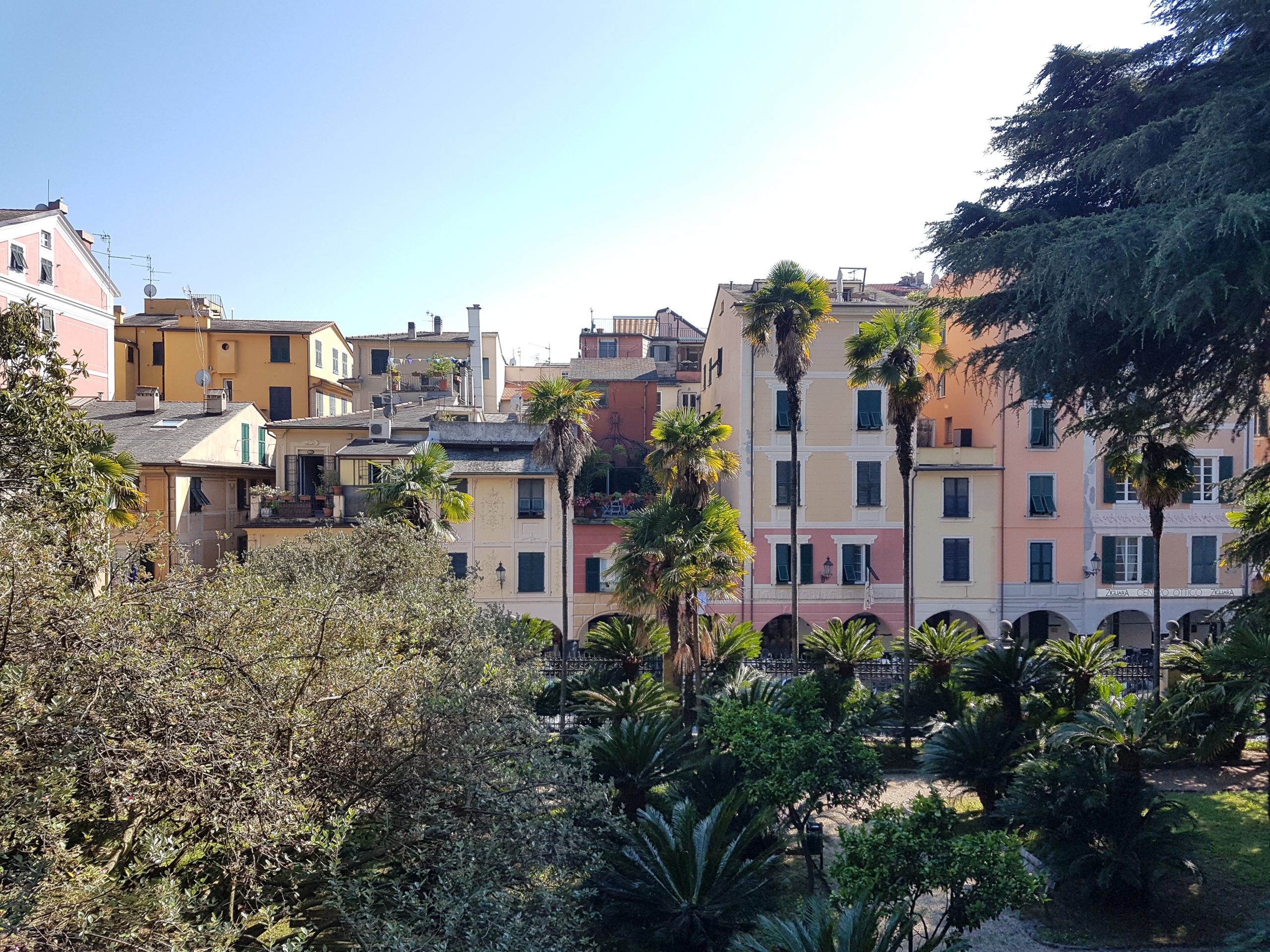 Another place worth visiting is Sestri Levante, a beautiful village built on an isthmus between two magnificent bays called Baia del Silenzio (Bay of Silence) and Baia delle Favole (Bay of Fairytales).

Next, we arrive in the Cinque Terre, widely recognized as some of the most beautiful villages in Italy.

Each of the five hamlets has its own characteristics.

The largest village is Monterosso, which is also the least ‘vertical’ meaning that you won’t have to climb as much as in the others.

Here you will find the widest sandy beach in Cinque Terre.

Proceeding east you reach the most famous village, Vernazza, characterized by its small harbor and seafront medieval church.

It’s full of restaurant and bars, and often quite crowded – as opposed to its neighbor, Corniglia, which is the quietest of all.

Why? Because it’s the only village that is not on the sea and that cannot be reached by boat.

And when you reach it by train, you can either take a small bus that takes you to the center or climb 382 steps!

But the view is gorgeous and experiencing its quaint authenticity is totally worth it.

Manarola is probably the most photographed village, thanks to its terraced vineyards that overlook the delightful port and the dramatic cliffs.

Riomaggiore features tower homes, a castle and a small rocky beach. It is the starting point of different hiking trails, most notably the Passeggiata dell’Amore (love path), which is closed due to a landslide.

Just before leaving Liguria, you have the chance to visit some beautiful villages in the Gulf of Poets, named this way because many writers and artists were inspired by it throughout the centuries.

Lerici is characterized by the castle that dominates its silhouette, by tower houses from Pisa’s domination period, and by elegant XVIII-century palazzi.

Villa Magni is where Percy Bysshe Shelley and his wife Mary Shelley lived at the beginning of the XIX century. 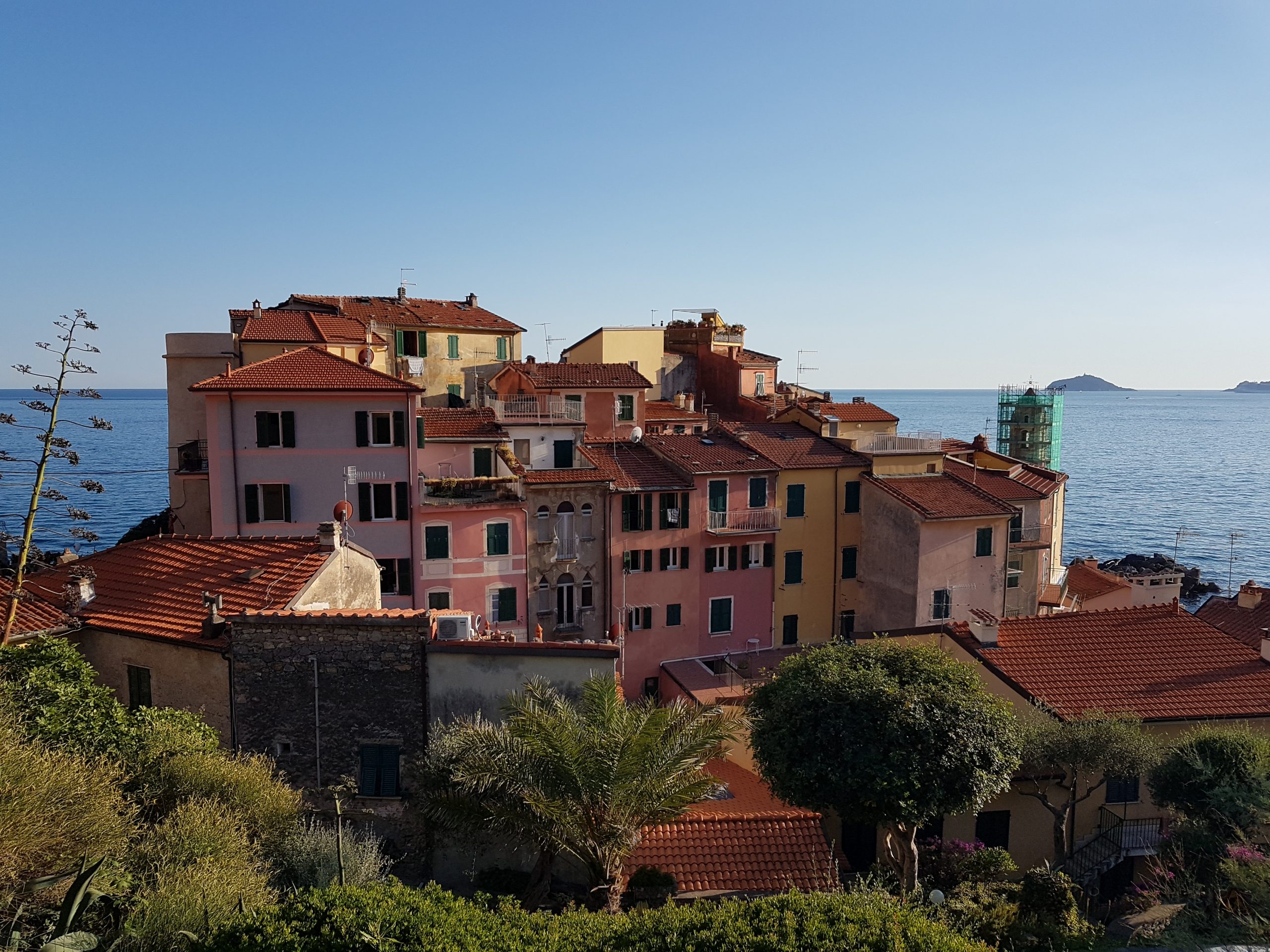 Other artists that decided to spend some time in Lerici were D.H. Lawrence, Virginia Woolf and Gabriele D’Annunzio.

Tellaro is tiny but full of personality, so much so that it was elected as one of Italy’s most gorgeous villages (Borghi più belli d’Italia).

Admire its striking pastel-pink church of San Giorgio, stroll between its colorful buildings, and relax in the quaint piazza to learn about the local legend about how a giant octopus once saved the villagers from a pirate incursion!

Right between Liguria and Tuscany, we recommend stopping in the historical area of Lunigiana, which is dotted with pretty villages.

Medieval Sarzana is home to an imposing fortress and citadel, while its Cathedral mixes Romanesque and Gothic styles.

Castelnuovo Magra is small but boasts a beautiful castle and the elegant Cornelius Ingolotti Palace. 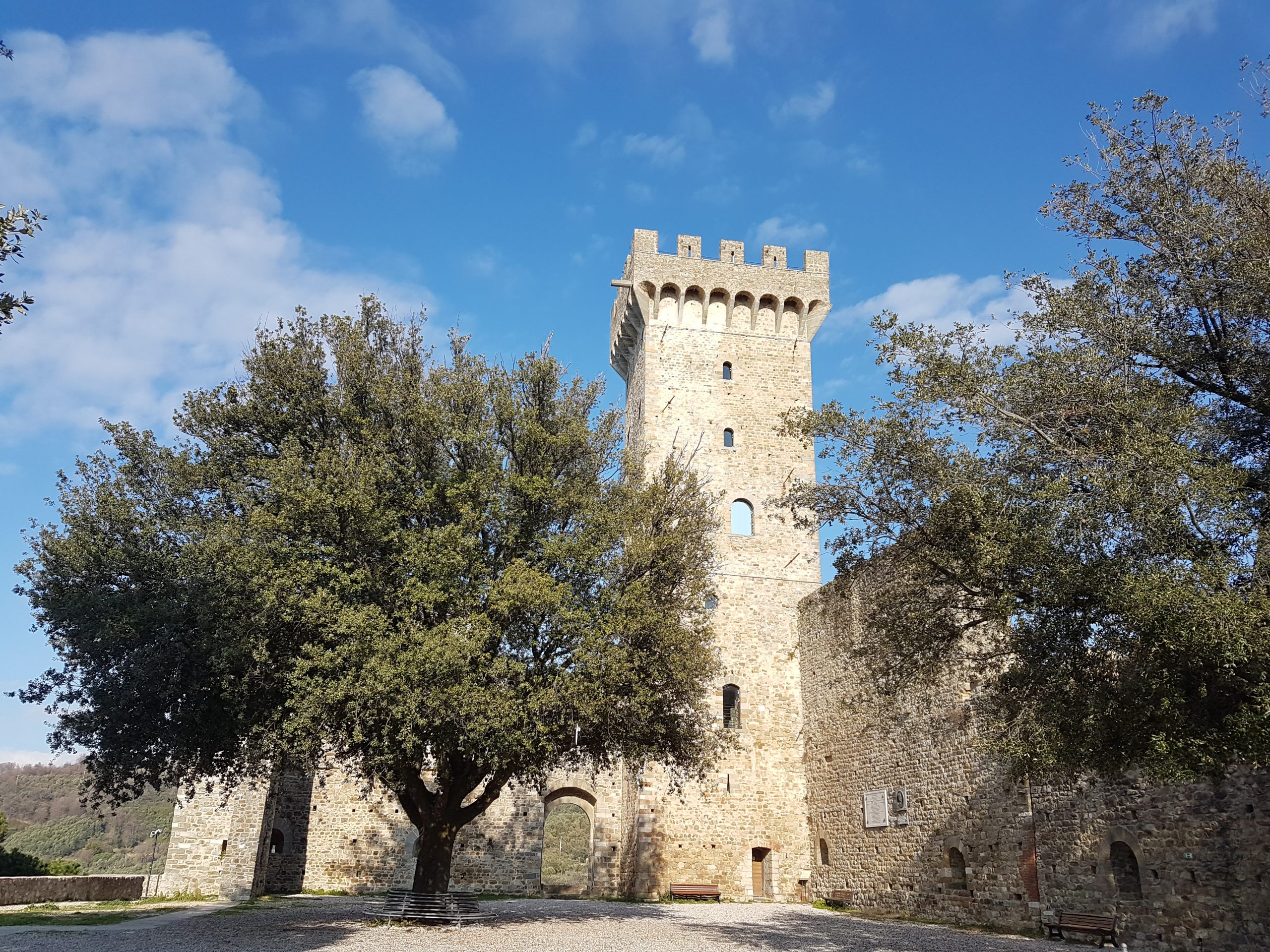 It is also famous for its Colli Di Luni Vermentino DOC wine and the surrounding hilly area is ideal for visiting cellars and enjoying wine tasting.

The wonderful historic center Fivizzano features the defense walls built in 1540 by Cosimo de’ Medici, the tomb of poet Labindo and a beautiful Baroque fountain in the square.

Pontremoli is a typical medieval village along the Via Francigena, and its historic center overlooks the Magra River.

Don’t miss a visit in the Pagnaro Castle and its museum, which houses the Statue Stele, or anthropomorphic sculptures with a semi-lunar head dating from between the first and fourth millennia BC.

Some of Tuscany’s most beautiful villages are scattered around the area of Valdorcia, with its idyllic rolling hills covered in sunflowers, grain or vineyards – and the surreal clay hills known as Crete Senesi.

This is where you will find a small medieval town with red brick buildings: Buonconvento was once an important stop for travelers along the Via Francigena and for local trade.

Time seems to slow down in Pienza, known as the “ideal city of the Renaissance” thanks to the project by the humanist Enea Silvio Piccolomini (later Pope Pius II).

Pienza’s main attractions include Palazzo Piccolomini, the Cathedral and the Town Hall.

In the heart of Bagno Vignoni you will find a Renaissance-era swimming thermal pool surrounded by beautiful arcades and ancient buildings.

This part of Tuscany is also famous for its red wines, such Brunello di Montalcino and Vino Nobile di Montepulciano. 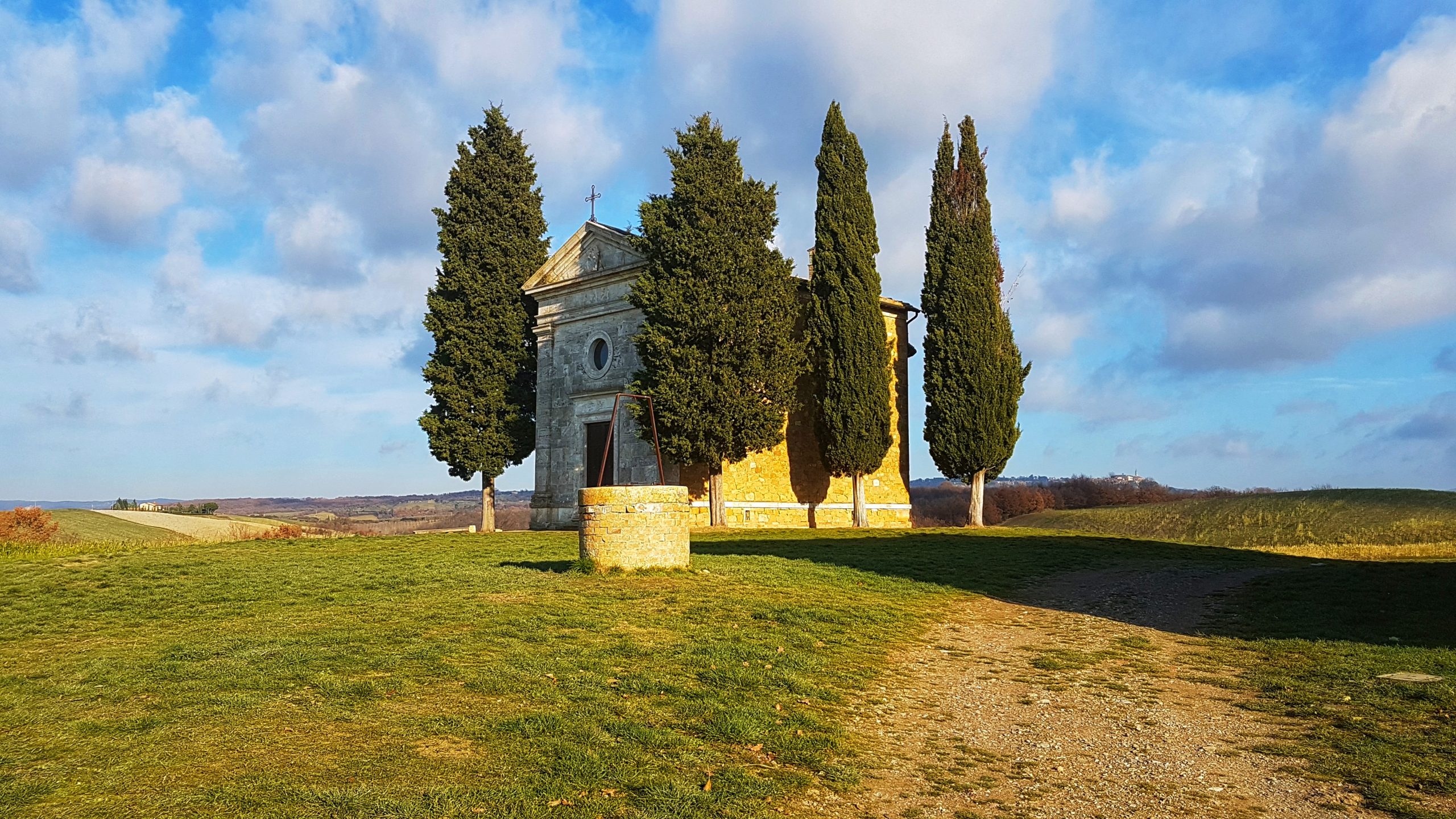 In addition to wine tastings, you can stop in Montalcino to admire the imposing Rocca fortress from 1361, the clock tower at Palazzo dei Priori and the Civic and Diocesan Museum of Sacred Art.

Just another insider’s tip for you: on the road connecting Liguria with Tuscany’s Valdorcia, you will find Lajatico, the native village of maestro Andrea Bocelli.

Every year in July, he hosts a concert here, in the evocative Teatro del Silenzio.

What about the beautiful villages near Florence?

Tiny Montaione is home to the Jerusalem of Tuscany: San Vivaldo is a complex of chapels and churches reproducing the Holy Land.

It was built during Medieval times so that poor or sick pilgrims could visit Jerusalem in a virtual way.

Certaldo is a fascinating medieval hamlet in the heart of Val d’Elsa.

You can reach its Castle and historic center either by climbing up the steep hill on foot or with the funicular railway.

Palazzo Pretorio is the local symbol with its brick façade, a clock tower and the coats of arms in glazed terracotta, marble and pietra serena stone.

Greve in Chianti belongs to the province of Florence yet is located entirely in the famous Chianti area.

Visit its Wine Museum to learn about the history and culture of the local wine.

Here you will also find a lovely Franciscan monastery, the Neo-Renaissance church of Santa Croce, and a historic market in the main piazza.

The distances between the most beautiful villages in Liguria and Tuscany are relatively short, allowing you to view different combinations in a few days.

Nevertheless, we at BeautifuLiguria recommend embracing the concept of Slow Travel to savor, feel and experience the essence and history of each place, as their locals and culture deserve.

We have put together a 7-day trip between Liguria and Tuscany, and would be very happy to assist you in designing a personalized vacation.